What Are the Benefits of CBD? Our Interview with MIC 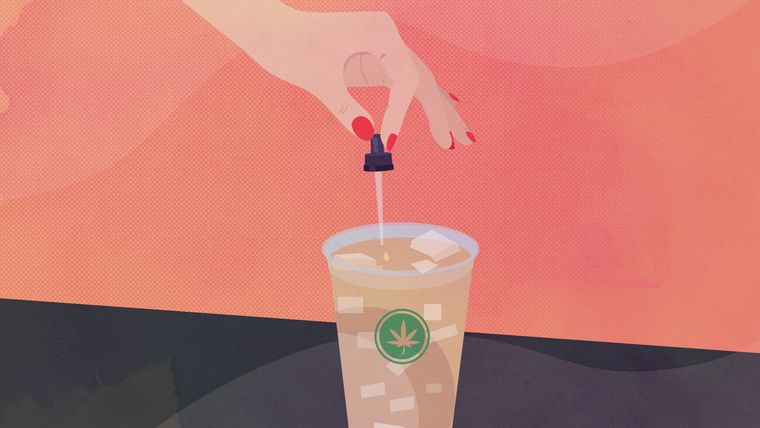 What are the benefits of CBD — and is it the magical elixir that will save us from our anxiety?

A cannabis derivative called CBD — short for cannabidiol — has been zealously appearing on menus at coffee shops and cocktail bars in New York City and beyond. Flower PowerCoffee, Van Leeuwen ice cream, By Chloe and an Astoria bar called Adriaen Block have all recently introduced CBD-infused items on their menus, promising all the chill of weed with none of the high.

CBD oil is one of the latest health fads to enter the zeitgeist (there’s a long list of these — ranging from medically sound advice to questionable things like avoiding carbs for eternity). For an extra $2,you can get 15 milligrams of CBD added to your cold brew (or matcha or tea) at Patent Coffee, the first Manhattan coffee shop to provide CBD, Emily Williams, the store’s general manager, said in a phone interview. The shop advertises CBD as a boost with benefits; an easel outside the storefront highlights the supplement’s supposed superpowers, which include pain and anxiety relief.

I tasted Patent’s cold brew with and without the tincture, which has a slightly earthy, if not totally tasteless flavor.

CBD versus THC: Will CBD get you high?

While CBD is derived from the cannabis plant — the same one that’s used to produce marijuana — it’s not an intoxicant, meaning it won’t get you stoned. CBD is just one of the many of cannabinoids found in cannabis — THC, or tetrahydrocannabinol, the one responsible for the high, is another. The type of CBD that’s legal in states where weed isn’t is typically derived from hemp, a cannabis plant that has very minimal traces of THC.

CBD as a wellness remedy

Williams, of Patent Coffee,said she first learned about CBD and how it might help diffuse her own anxiety after she saw how cannabis impacted her husband, who procured a medical marijuana card from the city of New York per his doctor’s recommendation. At the time, her husband was on five different prescription medications, and with the help of marijuana, was able to get off of all of them. “The biggest thing he was able to go off of was morphine — most of the other drugs were meant to counteract the side effects of morphine,” she said, explaining that the medications contributed to other side effects.

Williams chose to start taking CBD — figuring the lack of THC meant it wouldn’t disrupt her ability to work — and believes it has helped her manage her anxiety. “I start my day with30ml and then half way through the day, I take another 15ml,” she said. She introduced CBD to Patent Coffee on April 20 and said the interest has only surged since. “Being in New York, this is where everyone wants to try everything to be healthy besides going to the gym,” she said. Williams said she sees the same patrons every day get their supplement put in their morning beverage, and new, curious customers regularly.

“Being in New York, this is where everyone wants to try everything to be healthy besides going to the gym.” - Twitter

Despite there not being much substantial proof surrounding CBD’s benefits (more on this later), RonSilver, chef and owner of  Bubby's in Manhattan recently launched his own line of cannabis edibles called Azuca. Silver’s products include a range of sweeteners and syrups that he said will kick in within 15 to 30 minutes because of how the ingredients are metabolized. Azuca CBD products are available in NewYork; Azuca with THC will be available in Massachusetts in September, with plans to expand to multiple states in the coming months.

CBD’s benefits, as told by marketers

Marketers are giving CBD the ultimate health halo treatment. And sure, there’s something particularly “wellness-y” about taking an expensive potion to get back into balance, as Cannabis Feminist Jessica Assaft told Well and Good. Dirty Lemon,a beverage company that adds different, trendy supplements to its formula, launcheda CBD-infused formula in July. Zak Normandin, CEO and founder of the brand,said that Dirty Lemon is at “the forefront of wellness trends” and provides its customers with “functional ingredients,” citing previous Dirty Lemon beverages that included charcoal and collagen. Normandin said the “benefits [of CBD]include relief from chronic anxiety, stress management, decreased muscle and joint pain, acne reduction and improved sleep quality.” The product also contains l-theanine, he added, “a therapeutic ingredient found in tea that is known to improve cognition, heighten alertness and promote tranquility.”Research around l-theanine’s benefits is murky, and while it has shown to promote calmness when consumed in its natural state —namely in black tea — more research is needed to show its impact as a supplement.

This all sounds great — and perhaps an easy avenue for self-improvement — but none of the claims are evaluated by the Food and Drug Administration, as the back of Dirty Lemon’s bottle reads. And this brings us to the science behind CBD: There’s little research on the effects of CBD, and much of the support for the supplement is anecdotal rather than journal-based. This doesn’t mean that CBD doesn’t work,just that claims should be substantiated by medical experts before we all go buying CBD-infused everything.

“Research had been prohibited all these years,” Joel Stanley, the founder and chairman of CW Hemp, aColorado-based hemp company that recently collaborated with Moon Juice to create special wellness drinks, said over the phone. “In the next decade, we’ll have a lot more answers to so many of the questions [around CBD].” Early research has identified CBD as a possible treatment for conditions like high blood pressure, physical pain and anxiety, but many of these studies have minuscule sample sizes or are observed in rat subjects, rather than human ones.There are glimmers of progress in this field: Earlier in 2018, the FDA approved Epidiolex, an epilepsy medication made with CBD shown to help treat specific types of seizures in children. Epidiolex is the first prescription medication with CBD to gain such approval in the U.S.

There are nuances surrounding CBD and its effectiveness. Dr. Najeeb Hussaini, a board-certified family physician who evaluates patients to see if they qualify for medical marijuana at NY Medical Marijuana Associates, said in a phone interview that CBD "does have properties that contribute to physical and mental pain relief for mild to moderate cases, but in order to benefit chronic conditions and reach the body’s pain receptors, it requires some dosage of THC to get into the bloodstream and kick in. “Ultimately, [in order to reach] the pain receptors you need to target, the chemical has to attach itself to the THC receptor in order for it to work,” he said.

What’s next for CBD research

ProjectCBD, a nonprofit working to promote research into the medical uses of CBD, writes on its website that “scientific studies have established that CBD and THC interact synergistically to enhance each other’s therapeutic effects.” They add that despite the misconception that “THC is the bad cannabinoid,” and “CBD is the good cannabinoid,” the two work best together. As ProjectCBD writes, “extensive clinical research has demonstrated that CBD combined with THC is more beneficial for neuropathic pain than either compound as a single molecule.”

“One ability we have now is that anecdotal evidence is becoming more meaningful to the scientific community,” Stanley, the founder of CW Hemp, said. “At this point for marijuana and for hemp, the anecdotal evidence is hundreds and thousands. People are saying, ‘This is working,’ and finally we are studying it because we know there’s something there.” As for these anecdotes that support using CBD in amore recreational sense, one staffer at Esquire described the supplement as giving her “all the upsides of a glass of wine, but without the fear that you’re going to accidentally tell your co-workers something embarrassing.”

As a consumer, it’s important to pay attention to where the product comes from and how it’s being tested. Just like with any health trend, certain companies will hop on the bandwagon to make a quick buck without paying close attention to the products’ actual effects. “You’re always going to see the green rush, with companies that are coming in and it’s just about making money on something popular and the companies don’t really care about the active ingredient,” Stanley said, adding that this happens in almost all vitamins and supplements.

Dr. Hussaini remains skeptical about the boom in CBD products. “If anecdotally it’s giving people good feelings and relief, sure,” Dr. Hussaini said, lingering on the fact that CBD quality varies. “Over-the-counter product especially tends to basically be gimmicks and they’re certainly not going to be as effective as medical marijuana for chronic illness in my medical opinion, but again it depends on the quality, purity and potency of the product.”