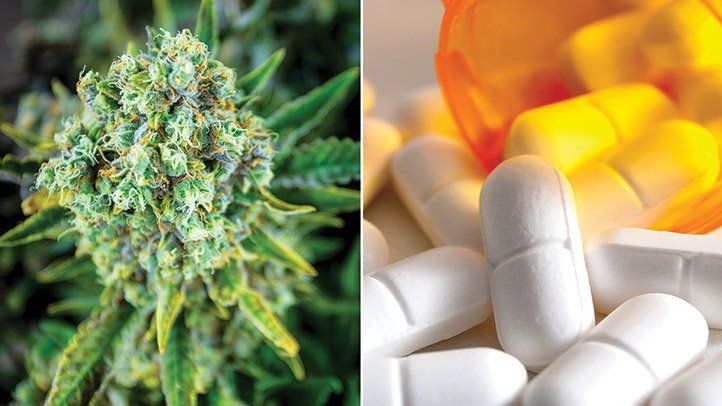 A study conducted by Columbia University Medical Center found that states with access to medical marijuana, saw a nearly 20% drop in opioid prescriptions. Authors said the findings underscore the importance of providing patients with pain management alternatives, such as cannabis, in efforts to reduce opioid use.

Drug overdoses remain a leading cause of injury-related death in the United States, and the U.S. Centers for Disease Control and Prevention reports that 68 percent of those deaths involve illicit or prescription opioids. The new study examines opioid prescriptions made specifically by orthopedic surgeons, who it notes are the nation’s third-highest prescribers of opioids.

“Although our study does not support a direct causal relationship, these population-level findings show that legalization of medical cannabis and patient access to dispensaries may be associated with reductions in opioid prescribing by orthopaedic surgeons,” the study’s authors concluded. “The observed trends reported in this study may be a reflection of growing availability of alternative pain management options for patients.”

“We found that overall opioid prescribing by orthopaedic surgeons in this cohort was reduced in states permitting patient access to medical cannabis, compared with those who do not.”

Analyzing nationwide Medicare Part D prescription drug data, researchers measured the aggregate daily doses of opioid medications prescribed by orthopedic surgeons in each state annually. They then looked for associations between that state-level data and the legal status of medical marijuana in each state.

As with past studies examining correlations between medical marijuana and opioid prescriptions, the Columbia analysis found a marked drop in prescriptions among states with medical cannabis laws (MCLs). “State MCLs were associated with a statistically significant reduction in aggregate opioid prescribing of 144,000 daily doses (19.7% reduction) annually,” the study, published this month in the Journal of the American Academy of Orthopaedic Surgeons, says.

Medical cannabis laws “were associated with a statistically significant reduction of 72,000 daily doses of hydrocodone annually.”

Not all state legal marijuana programs operate the same way, of course. It can also take years after a state adopts a medical cannabis law before its program is up and running. So the researchers looked at various specific factors, including when storefront dispensaries opened, whether state laws allowed home cultivation by patients, and whether recreational cannabis was legal for adults in each state.

Of the relationships that the researchers found were statistically significant, two stood out most clearly: States with active medical cannabis laws saw a 19.7 percent reductions in Medicare Part D opioid prescriptions made by orthopedic surgeons compared to states without medical cannabis laws. On a more granular level, states with operating storefront dispensaries saw a 13.1 percent reduction in those prescriptions.

In “states that allow physicians to recommend medical cannabis to patients for any reason, there was a significant reduction in prescriptions for fentanyl…”

Cannabis is a particularly appealing alternative pain medication to study the effect of, the authors wrote, “because of its efficacy in treatment of chronic and acute pain and its potential for replacing and/or reducing opioid treatment.”

The study’s results contribute to a growing body of research indicating that medical cannabis accessibility significantly reduces statewide opioid use—and even opioid deaths. As the Columbia authors note in their report, “Multiple large nationwide database studies have shown that states with the legalization of medical marijuana have seen reductions in the opioid prescription rates and opioid-related mortality rates. The authors of these studies have theorized that in states where medical cannabis is more available, patients are likely to substitute cannabis for opioids in their pain management.”

For example, a meta-study that was recently published also signaled that marijuana shows promise as a treatment option for chronic pain and could serve as an alternative to opioid-based painkillers.

Research and patient testimonials continue to show the efficacy of MMJ in the treatment of chronic and acute pain and its potential for replacing and/or reducing opioid treatment.